Svendborg is home to "Danmarks Forsorgsmuseum" social history museum and "Naturama" natural history museum. The latter holds a wide variety of stuffed animals from whales and bears to birds and Foxes.

The largest container ship company in the world, A.P. Møller-Mærsk has its origins in Svendborg, in the "Villa Anna".[2] 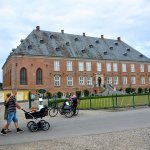 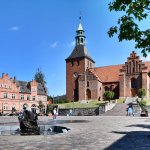 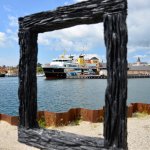 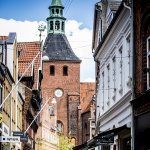 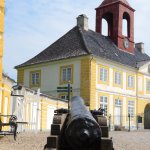 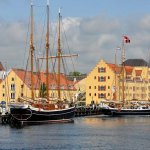 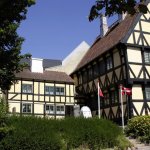 Svendborg is 29m above sea level.

The climate here is mild, and generally warm and temperate. There is significant rainfall throughout the year in Svendborg. Even the driest month still has a lot of rainfall. This climate is considered to be Cfb according to the Köppen-Geiger climate classification. The temperature here averages 9.4 °C | 48.8 °F. Precipitation here is about 783 mm | 30.8 inch per year.

In Svendborg is the average length of day 13 hours (of which June and July are two months with longest days).

The highest temperature in Svendborg was recorded 31 °C.

Vor Frue Kirke (Church of Our Lady) located on a hill north of the market square was established in the 13th century but was enlarged in the late Middle Ages with a Gothic chancel, transepts and tower. A spire was added in 1768. The oldest section is the red-brick, Romanesque nave. Today the church reflects the comprehensive restoration work undertaken by Ove Petersen in 1884. The altar, pulpit and other artefacts date from the 17th century.[18][19]

Anne Hvide's House (Anne Hvides Gård), a two-storey, half-timbered building, is one of Svendborg's oldest houses. Anne Hvide, a widow of noble descent, had it built in 1560. It was used as an inn from 1837 to 1867. After being restored, it became the town museum in 1916. It still belongs to Svenborg Museum who use it for exhibitions on the history of Svendborg during the summer months.[20]

Naturama, established in April 2005, is a natural history museum enhanced by means of various technological support features including light and sound, film, and expedition scenarios. It has a large collection of stuffed animals and birds in natural surroundings.[21][22] A recent addition has been an exhibition depicting the world of spiders.[23]

Attractions close to Svendborg include Egeskov, the best preserved Renaissance water castle in Europe,[24] Valdemar's Castle on the nearby island of Tåsinge,[25] and Hesselagergård, a historic manor to the north of Svendborg.[26]

Svendborg is a town on the island of Funen in south-central Denmark, and the seat of Svendborg Municipality.

The krone (DKK) is the official currency of Denmark, Greenland, and the Faroe Islands.

Get notified on all news and activities right in your mailbox.

Find out more about the city